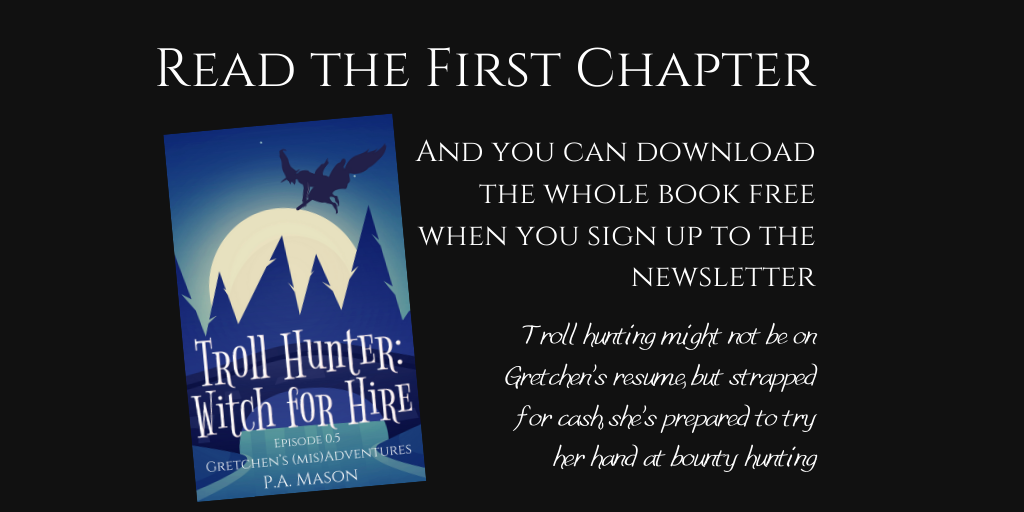 So here it is. Episode 0.5 titled ‘Troll Hunter: Witch for Hire’ is (finally) ready to download once you’ve hit subscribe on the newsletter. Now I know folks don’t like giving away their email address — I don’t like spam either — so I’m including chapter one for you to take a look at before you commit.

Troll hunting might not be on Gretchen’s resume, but strapped for cash, she’s prepared to try her hand at bounty hunting.

And maybe a stray love potion while she’s at it. Without a decent payday in months, she’s close to calling it quits, and if she doesn’t come through, her reputation — and the prospect of more customers — will be ruined.

Between an insolent spell book, an old friend too sick to run her favorite tavern and a new guy in town who is the object of every maiden’s desire, Gretchen scrambles to keep everyone happy.

A potion cocktail has unintended side effects with massive ramifications and Gretchen has no idea how she did it. If she doesn’t fix it, she’ll be forced to hang up her witches hat and serve drinks for the rest of her days.

Gretchen hummed a tune as she bottled the last of her wart serum and stacked them in her pantry. It had been a quiet week, but she knew stocking up now would save her trouble when the first chills of winter rolled around, and she’d be up to her eyeballs in runny noses.

Mulligan edged closer to the cauldron and took a tentative sniff of the dregs at the bottom.

“I’d mind your tongue, Mulligan. That brew is meant for killing stubborn warts, and with your temperament it might vanquish you altogether. Remember what happened last time you poked around in one of my potions? You’re a lot less purple than you used to be, but I’m the only one who thinks the color suits you.” Gretchen barked a laugh, and the feline hissed. She swung the cauldron on its hook and grabbed a cloth when the bell by the door rang out. She spun on her heel with a grin. “Customers, Mulligan!”

Wiping her hands, she scurried over and swung the door open with what she hoped was a polite smile. A waif of a girl with an unfortunately large nose stood on her threshold wringing her hands. “Can I help you, kid?”

The girl licked her lips, and her eyes darted.

Gretchen smiled knowingly and cackled. “A love potion, I see. Who is the unfortunate soul?”

The girl recoiled with a scowl and turned her nose in the air. “Never you mind, witch. Can you help or not?”

Gretchen tapped the side of her nose and winked. “I brew the finest love potion this side of the river. Guaranteed to have them drooling all the way to the altar.”

The girl pressed her lips together and looked her up and down. “How much?”

Gretchen leaned against the doorframe and rubbed her chin while calculating. “Three gold coins. The ingredients are hard to come by.”

The girl’s jaw dropped, and she took a step back. “Three? For a brew that might not even work?”

Gretchen snickered and waved a hand. “Girl, you should see the fellas lined up at my door on a Friday night. Why, witches don’t keep brooms just for flying, you know. They come in real handy when you need to start batting them away with a stick. With their poems scribbled in notebooks and bunches of flowers…”

The girl’s eyes widened, and Gretchen frowned as she scampered away around the back of the house. She leaned around her porch to get a better view of the road.

Three men marched toward the house, and if Gretchen wasn’t mistaken, one of them was the mayor. Her house wasn’t on the way to anywhere in particular, and when they turned to open her garden gate, she couldn’t believe her luck. Four customers in one day. Providing the kid didn’t skedaddle. “How can I help you fine gentlemen today?”

The mayor stepped forward, and the other two lingered by the gate. One of them she was sure was the mayor’s son, and the other looked like a farmer. When she tried a friendly smile, only the son returned the gesture.

“Ah, yes. The town requires your services, madam. We seem to have an infestation problem.”

His lip curled, and Gretchen nodded slowly. “Right… the ah, lice kind? Or perhaps something a little more… personal?”

The mayor bristled, and he glowered at her. “Not on our persons! This fine citizen,” he waved a hand at the farmer, “has a troll that has taken up residence under a bridge by his farm.”

“It’s eating our cattle,” the farmer piped up.

“A troll?” Gretchen frowned. “I don’t think I have a potion for that. Wouldn’t a hunter be more fitting in this kind of situation?”

The mayor coughed, and his son waved a hand to silence the farmer. “We ah, tried that. Didn’t work.”

Gretchen leaned back where she stood and held a hand up. “Whoa, now. You want me to sort out a troll who gave one of your biggest and burliest a thrashing?”

“We thought it best that it’s dealt with… by one of your kind.” The mayor didn’t bother to conceal his disdain. “He may be more inclined to trust you. It’s simply a matter of slipping him some of your rat poison and the matter will be concluded.”

“Or,” Gretchen raised her eyebrows, “I go down there, and he fancies a witch sandwich.”

The mayor clapped his hands together and drew a deep breath. “We can make it well worth your while. The price of the cattle that creature has consumed has put quite the dent in the economy. Why, I can barely afford a side of beef! Me, the mayor!”

“Worth my while, eh?” Gretchen considered her mounting debts. “I should hope so if it’s a bounty hunter you’re after.”

“Splendid!” The mayor clamped her hand in a firm shake and turned on his heel. “I trust you’ll make this your top priority. Twenty gold coins. The reward will diminish with each beast that goes missing from now on.”

Gretchen opened her mouth to argue, but the mayor was already closing the garden gate behind him. She clicked her teeth shut as the men turned down the road, and only the mayor’s son tipped his hat to her with a commiserative smile. She’d heard nice things about that boy. Odd things too, but she wasn’t one to judge. Her mind snapped back to attention. Trolls. Big, hairy, stinking—

“Are they gone?” came a hiss from around the side of the cottage.

The girl rounded the corner with eyes darting and stood away from the door puffing herself up. “I’ll give you two gold coins. And I want the potion in three days.”

Gretchen let out a low whistle and put her hands on her hips. “Now see, I’m not sure that’s possible. Seems I have a troll on my hands, and you haven’t even provided me with a lock of this fella’s hair.”

The girl’s eyes widened, and her shoulders slumped. “Why do you need that?”

Gretchen waggled her fingers and winked. “I’ll need some of yours, too. It’s how the magic happens. If you want him to fall for you.”

Gretchen shrugged and turned, her mind already on the bigger problem. She bumped the door closed with her hip and scurried over to her windows to tug the curtains closed leaving her cottage bathed in firelight. Kneeling by a rug, she folded it over and pried up a loose floorboard to reach into the cavity below. She hauled out a leather-bound tome and carried it to her desk, holding it at arm’s length.

Mulligan meowed from an overstuffed chair and stalked across it to leap onto the desk with accusing eyes. When Gretchen dropped the book beside him, he hissed and backed away.

“Desperate times, fur ball. Unless you know how to take out trolls?” She clucked. “Nope. Didn’t think so.”

The spell book stretched against its restraints, wobbling the rickety table, and dismissing Mulligan altogether. Gretchen leveled a finger with a stern look. “Trolls. I need something to get rid of trolls. No nonsense. No party tricks. Any more of those fireworks, and I’ll throw you in the hearth myself.”

The book settled and Gretchen gingerly untied its laces. With a hand firmly planted on its cover, she closed her eyes and drew a deep breath through her nose.

The book caught her off guard and snapped open, its pages whipping by and its contents spewing into the air. Random words hung suspended in front of her eyes, along with animated drawings which wriggled up the walls.

“Enough.” Gretchen thumped the desk, and the spells settled back in their volume. “Now. Troll eradication, if you will.”

Pages turned more slowly, the words on each page shifting too fast to form a coherent passage. When the pages slowed to a stop, it left Gretchen staring at a blank page.

“What do you call this?” She threw her hands up. “You finally conceding you don’t have all the answers?”

A stick figure walked onto the page and trod across the spine over the other side. It flipped her the bird before leaving her view entirely, and Gretchen scoffed. “All right then. Back in the hole it is.”

The book rattled, its pages once more in a flurry of activity, and Gretchen smirked despite herself. With a hum of concentration, the pages snapped closed, then sprang open to rest on a section with tightly scrawled instructions and lists of ingredients.

“Now that’s more like it.” Gretchen rubbed her chin and narrowed her eyes. “Four potions? But that looks like a brew to take care of sweet itch! An antipsychotic, a remembering tonic. I’ve never even seen the last one. Care to give that one a name?”

The words began to fade, and Gretchen snatched up her quill to scribble a copy into her notebook. When she set it aside to let the ink dry, the spell book was slumbering, its pages blank.

“Well, I don’t fancy my chances of taking out a troll with any of those, Mulligan.”

The cat glared at her from under the sofa and resumed bathing himself. Gretchen scrubbed a hand over her face. “Well, I’ll be damned if I’m going in blind.” She fetched her cloak from its hook and tied her key to her belt. “I’ll bet Nora has an idea or two. Her spell book isn’t half as belligerent as mine.”

So there you have it.

Where will it go next? Sign up and find out!

Or check out some terrible poetry penned by Gretchen herself on the subject of love potions here.