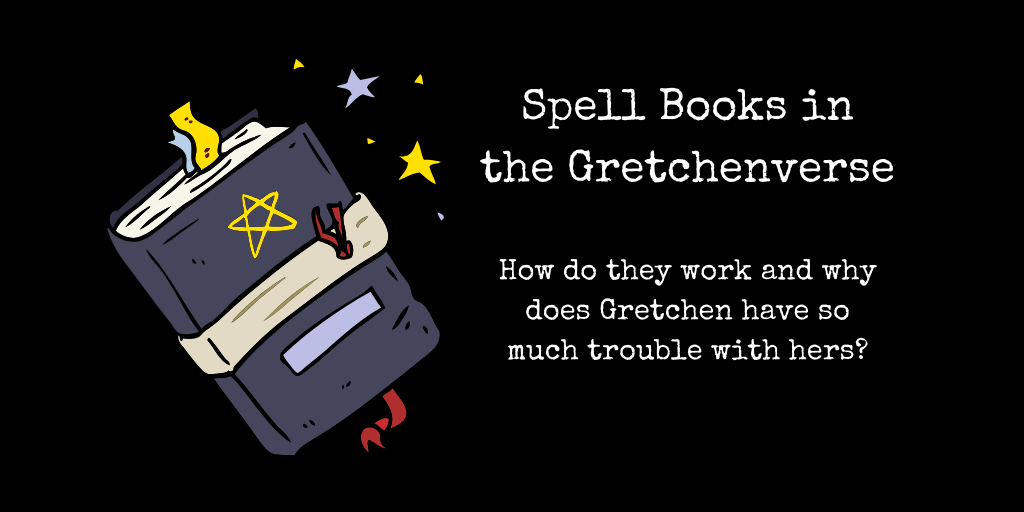 Spell books in the world of Gretchen aren’t your regular tomes. With minds of their own, they can be difficult to deal with, and I thought I’d share some background on how they work. But if you haven’t read episode 0.5, I’ll share a short passage first to give you an idea of what Gretchen is up against.

The spell book stretched against its restraints, wobbling the rickety table, and dismissing Mulligan altogether. Gretchen leveled a finger with a stern look. “Trolls. I need something to get rid of trolls. No nonsense. No party tricks. Any more of those fireworks, and I’ll throw you in the hearth myself.”

The book settled and Gretchen gingerly untied its laces. With a hand firmly planted on its cover, she closed her eyes and drew a deep breath through her nose.

The book caught her off guard and snapped open, its pages whipping by and its contents spewing into the air. Random words hung suspended in front of her eyes, along with animated drawings which wriggled up the walls.

“Enough.” Gretchen thumped the desk, and the spells settled back in their volume. “Now. Troll eradication, if you will.”

Pages turned more slowly, the words on each page shifting too fast to form a coherent passage. When the pages slowed to a stop, it left Gretchen staring at a blank page.

“What do you call this?” She threw her hands up. “You finally conceding you don’t have all the answers?”

A stick figure walked onto the page and trod across the spine over the other side. It flipped her the bird before leaving her view entirely, and Gretchen scoffed. “All right then. Back in the hole it is.”

The book rattled, its pages once more in a flurry of activity, and Gretchen smirked despite herself. With a hum of concentration, the pages snapped closed, then sprang open to rest on a section with tightly scrawled instructions and lists of ingredients. “Now that’s more like it.” Gretchen rubbed her chin and narrowed her eyes.

I must say, her spell book sure does suit her.

But I do have some sympathy for Gretchen’s plight. See, not every book acts the way hers does, and it’s a matter of maintenance. But before we get onto that lets start with…

How to spell books work?

I like to think they share a lot of similarities with Siri. As enchanted objects, they hold knowledge given to them and respond to a witches request to recall information. While Gretchen asks her questions out aloud, this isn’t actually necessary, but Gretchen does have a penchant for talking to herself anyhow.

So does that mean only witches can read them?

Yes. They are created to respond only to female magic users, though some of the pricier ones can be specific to certain bloodlines.

It’s actually a witches guild law, and those found breaking it can have their magic licences revoked. It’s not heavily policed, and most witches will jot down a list of ingredients before burning the note. But a regular book of spells is contraband so as to keep those without licences from practicing.

In fact, there was a case of a witch having her licence revoked where she kept a cache of spell books hidden. When she was found out, she was handed over to the regular courts where she was tried and convicted of unlawful sorcery and condemned to life in prison.

So how rare are spell books?

A brand new book is relatively cheap, but useless until it has been given spells to catalog. There are magical services that will assemble a spell ‘starter pack’, but these are pricier and the spells are fairly standard. Most spell books are handed down through the generations and the oldest are the most valuable as they hold more knowledge.

Is there any way to see what a book knows?

The only method of getting information out is to ask questions. And words are always up for interpretation. The library in the witches academy is the closest they’ve come to cataloging their collection, and even that can be hit and miss. An enchanted index lists themes of books, but cannot answer specific questions. Instead, they have witches with certain talents add their own knowledge to specific tomes to have some sense of order.

Seems a bit backward, doesn’t it?

Probably. But witches are a secretive bunch, and those in the guild hold up traditions. Before the guild was established, witches had more reason to keep their secrets close, and were often pitted against each other in wars between the kingdoms.

No. Hers is long overdue for a service. As an ‘artificial’ or ‘enchanted’ intelligence, they soak up more than just spells given to them. They learn from their custodians, and develop their own personality mash-ups over the years. Most of the servicing deals in smoothing over their response cues.

Why does Gretchen keep hers under the floor?

Gretchen’s book was handed down from her grandmother and has been in the Murkwood family for centuries. If it were stolen, she would be heartbroken. There are documented cases of spell book ransoming that have occurred over the years, and more than one story of a witch blackmailed into shady propositions to get hers back.

But another reason is so the tome doesn’t absorb too much from her daily life. Like as not, it would end up showing her shopping lists instead of ingredients when she next asked a question.

Wouldn’t it be safer to have more than one?

Yes, and Nora has several in her collection. But Gretchen was never one for study, and the thought of copying over spells from one book to another makes her feel ill.

Do they have any defense mechanisms?

Technically, no. But there is hot debate on the subject. A spell book will be reluctant to answer questions from an unfamiliar witch and may give them information that is… perhaps just a fraction inaccurate.

So there you go.

A potted history of spell books and all the nagging questions answered. Unless I’ve overlooked some. Comment with anything I’ve missed and I’ll add it to the post.

If you’re not a subscriber to the newsletter, and therefore haven’t scored your copy of episode 0.5, ‘Troll Hunter: Witch for Hire’, click here to get on board. Or for more bonus content, take a look at the episode 0.5 page here.