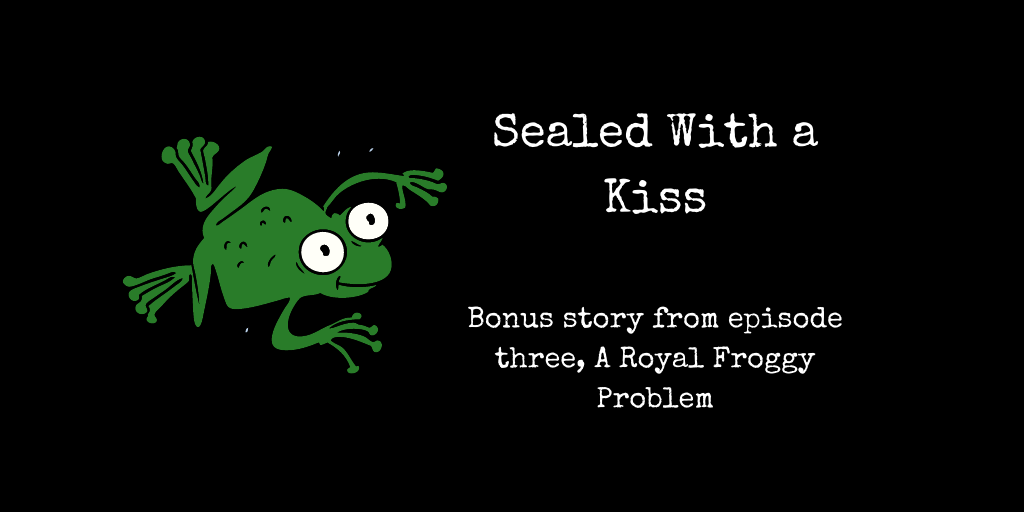 Most frog prince stories end with a kiss. A Royal Froggy Problem started with one. At the end of the book, Nora is quite rightly livid with Sheena for her part in the frog hex, but this story captures why the witch did what she did.

A cautionary word though, if you haven’t read the book, you may want to go check it out here first.

Sealed With a Kiss

Sheena excused herself from the throne room and clutched the vial in her pocket. She hadn’t seen her fiance all evening, and the potion she had brewed was becoming less potent as time wore on. Although nerves danced in her belly, she was resolved to transform her future husband into something less formidable, leaving no opportunity for her father to marry her off elsewhere.

The full moon illuminated the gardens, and she slipped through an open door under an arch heavy with the scent of jasmine. While warm, the absence of the scorching sun was a welcome relief. Her thoughts strayed as her silk slippers crunched on the gravel path, wondering if she would have time to prepare another dose before the morning meal.

A giggle from the shadows drew her attention, and Sheena narrowed her eyes at the far wall of the garden. Taking a tentative step from the path to the soft lawn, she crept closer, already suspecting who she would find in a hasty embrace.

Between the palm fronds concealing her presence, she curled her lip at the sight of her fiance groping a young woman. A servant, most likely, who wouldn’t dare refuse the lecherous pig. It was as though benevolent spirits had guided her here, giving her the opportunity to remedy his condition to something more fitting.

Moving warily, she unstoppered the vial and dabbed droplets from her finger onto her plump lips. Careful not to ingest any, she hid the vial among the bushes and strode out toward the couple.

“And what do we have here?” she pouted. “Am I not pleasing to his royal highness?”

His back was turned to her, though she saw his body tense in the dim light. The girl pressed herself against the wall, seemingly terrified, and he unhanded her to spin on his heel. The mottled red of his cheeks had nothing to do with that of shame, and he glowered at the interruption.

“What do you want, woman?” he sneered.

Sheena flashed a smile and flickered her eyes toward the girl. “Leave us, harlot.”

The girl scampered away and Sheena stepped closer to the Prince. His fists clenched at his sides, and Sheena reached to smooth his richly embroidered silk shirt. “Come now. Let me be the one to please you.”

His lip curled, but before he could refuse her, she stood on tiptoes to reach for his mouth, forming intent in her mind. When their lips locked, a crackle in the air prickled Sheena’s neck and her mouth twisted in a malevolent grin. She stepped backward as the prince began shrinking, his face already turning an alarming shade of green, his shocked expression distorting into an amphibian set of features.

“Think you could see out your days with your boot planted on my head, husband?” Sheena hissed. “Your only dominion now will be that of stinking marshes and insects.”

His highness, the frog, flicked his tongue from the bundle of clothes on the ground. Sheena drew her sleeve across her mouth before scooping the pile up and took a few deep breaths to collect herself. She knew what followed would be the performance of her life, and her fate would forever be in the balance. Leaving one slipper discarded, she pulled a pin from her hair and let out a piercing wail.

“The prince!” she screamed. “Someone help, my fiance has been hexed!”

And we all know who got the blame!

Perhaps I should put together the tale of her comeuppance set after A Royal Froggy Problem, though Nora was pretty clear Sheena was not off the hook with her!

For more bonus content, head back to the episode page to find it all in the one spot.