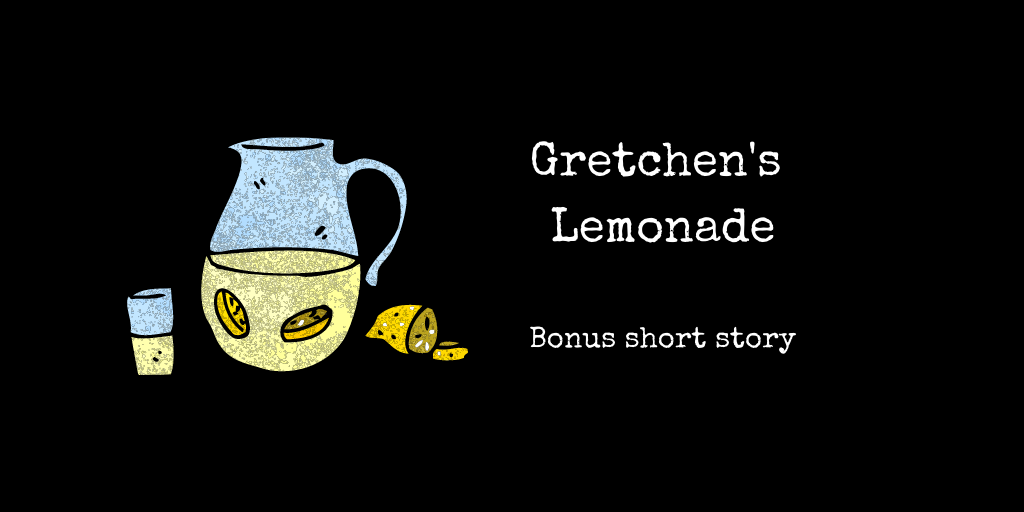 This week I thought I’d share a piece of bonus content not tied to a specific episode. Gretchen’s Lemonade is a (very) short story submitted to a monthly competition I take part in with The Australian Writers Center.

Now I’ve used some of these stories before as the opening passages for the books, and another as a mini epilogue for Troll Hunter: Witch for Hire. I won’t rule out using this story to kick off another episode, but until then, enjoy 🙂

The mounted courier blazed past the line of carts and splashed through the puddle in front of Gretchen’s makeshift stand. She curled her lip and flicked a glob of mud from the ribbon stitched to her pink apron.

“Really, Nora? Dignity aside, you had to choose a miserable day to do this?”

“You made the wager, and I won fair and square.” Nora glanced up from her newspaper with a smirk. “Besides, the fundraiser is tomorrow. You’re doing a good deed.”

“Nobody is buying lemonade from a witch on the side of a road. This is all to humiliate me. Where d’you learn to yodel like that, anyway? Anyone would think you’re some kind of mountain-woman icon.”

Nora chuckled and turned her attention back to the paper. “I’m a woman of hidden talents.”

Gretchen rolled her eyes and watched the procession to the city crawl along. Merchants and traders who hadn’t been early enough to get the worm waited as guards took their time to admit them past the gates. A delivery of raw hides was getting closer, and Gretchen wrinkled her nose at the stench.

“Oi, you there!” A driver leered at them. “Reduced to serving drinks, is it? Potion business not treating you well?”

Snickers came from the traders within earshot, and Nora stirred. Gretchen held a hand to her friend’s arm and stood with a cheery smile.

“Just doing my good deed for the day, sir. For the old witches’ home. Poor souls deserve a crust of bread, same as anyone. I think you’ll find our lemonade is the best of refreshments for a hardworking man such as yourself.”

“You’d do better with ale, hag,” he chortled. “A fire in his belly is what a man needs. Should have charmed your face into something pleasant if you wanted to con a man out of his coin.”

Gretchen smiled through gritted teeth as the peanut gallery roared with laughter. Pouring a cup of a slightly different pigment, she stepped over a puddle and proffered it. “A taste test then. I challenge you to say this isn’t the finest lemonade in the city.”

He opened his mouth as if to refuse then glanced at the onlookers. Gretchen reckoned his type wouldn’t back away from a wager, and he snatched the cup with a grimace.

“Probably horse piss. But I’ve had worse.” He tipped his cup to the spectators and threw it back in a single swallow. Gretchen bit back a grin and watched as his eyes widened.

With a hand to his belly, he gave a mighty belch and flames spewed from his mouth. The poor beast in front leapt ahead and jostled the next wagon. A chain reaction ensued and shouts came from the entire line. Gretchen dodged a flying hoof as she jumped over the puddle and grabbed Nora’s elbow. “Let’s get out of here.”

“Couldn’t help yourself, could you?” Nora panted as they ran for the cover of the treeline ahead.

“Made the entire venture worthwhile.”

She cant help herself, can she?

But I think that’s why Gretchen is awesome. I hope you enjoyed this snippet and maybe you’ll recognize the scene somewhere down the line in one of the books.

Looking for more bonus content? Why don’t you check out the interview with Gretchen from way back before the series kicked off?

Not sure where you’re up to in the series? You can check out the series page on Amazon for the most up to date releases.