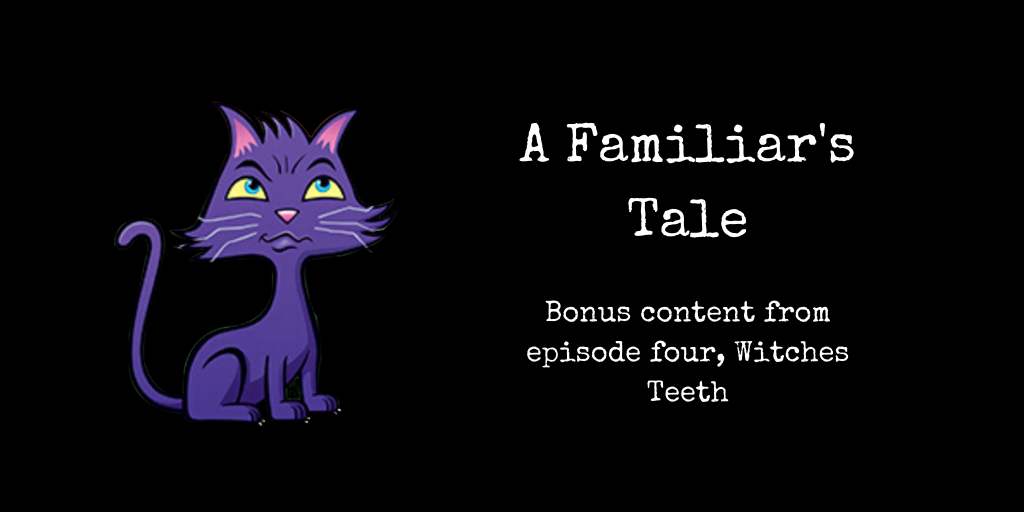 Remember that part at the start of Witches Teeth where Mulligan seemed quite enamored with the tooth fairy trying to yank Gretchen’s teeth out? I thought I’d share that scenario again from Mulligan’s point of view. I’ve been meaning to get to a fuzzy feline story for a while now, and hope you enjoy this one.

Mulligan stretched his paws on the coverlet and yawned. The light beyond his lidded eyes grew bright, and he wondered momentarily if morning had come already. But the witch was snoring, and she always was a damnable early riser.

Stretching his legs languorously, he rolled his face away in an attempt to escape the light. A buzzing caught his attention though, and he sat up with ears pricked to identify which insect sought to disturb his slumber. When his eyes fell upon the luminescent creature, all thoughts of sleeping fled.

A peculiarly small humanoid winged life form hovered over his witch, a length of string coiled over its shoulder. The glow was… captivating. Mulligan stretched a paw toward it, the need to touch its beauty warring with a sense of awe at its very existence.

Mulligan watched on as the being tied its thread around a tooth, the witch making the task laughably easy as her mouth hung open. He always thought her maw was fit to catch flies, given how much time she spent with it open.

When the buzzing thing of beauty flew back suddenly, Mulligan’s eyes widened. His witch grumbled something incoherent and then fell back to silence. With a sweeping arc, the winged creature make another pass, and this time his witch sat up with a rather undignified squawk.

She would scare it away. Mulligan reached to swat at his witch’s hand to keep her from harming the glowing apparition, then pounced as she lunged to catch it. His witch made sounds of protest then rounded on him as the creature escaped the room.

“Fat lot of good you are,” she huffed.

Mulligan glared at her and blinked as the light that clouded his mind receded. He sniffed at the air, desperate to identify the beautiful trespasser. He had a feeling its arrival boded ill for his witch. As her familiar, it was his job to warn her.

Mulligan jumped back on the bed and curled up as his witch left the bedroom. She never listened to him, anyway.

So there you go!

An insight into the mind of Gretchen’s purple feline familiar. I will bring more of these to you when I can, perhaps Mulligan can have his own little series!

Have you read Witches Teeth yet? You can check it out on Amazon here.

Or if you’re looking for more bonus content, head back to the episode page where I keep it all in the one spot.