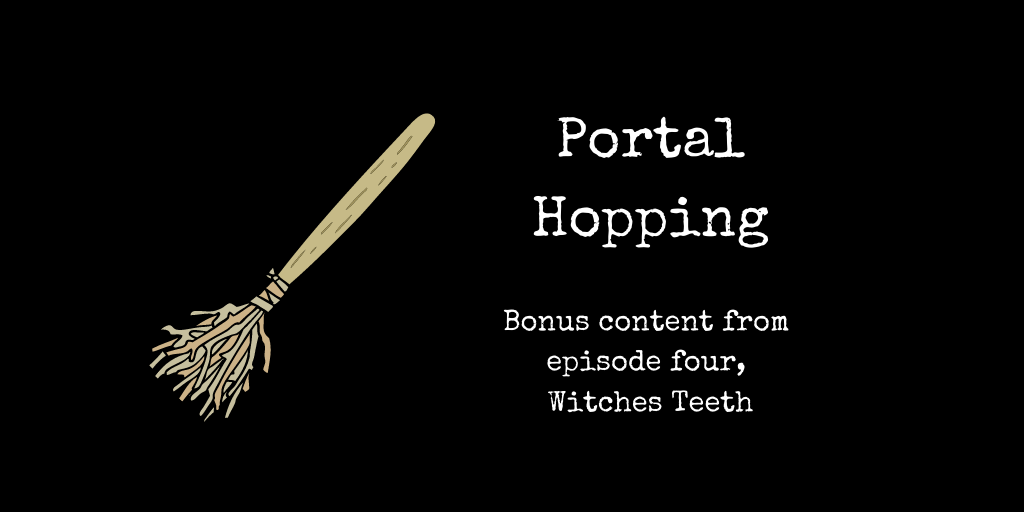 Gretchen did promise to do some portal hopping at the end of episode four, Witches Teeth, to see if she couldn’t find her Great Aunt Esme. It’s now she learns, though, that wizards have a hand in the shroud of secrecy surrounding them.

Gretchen’s eyes stung as she shot through a cloud climbing above the usual thermals she flew in. She’d been up and down all morning, avoiding all manner of winged creatures in the air, and was no closer to her quarry.

Portals. Open doorways which had been lingering above her head all this time. Nothing could be worse than the realm of fairies and arachnids, and she fancied there had to be a portal leading to a tropical island with cocktails and pristine beaches. That would be somewhere her Great Aunt Esme would have wound up given a choice.

An energetic prickle raised the hairs on the back of Gretchen’s neck, and she cast around for signs of an opening. The last time she’d traversed a portal, it had been in darkness, and she had no way of knowing if they were visible to the naked eye.

There. A shimmer, to her left. Reefing her broomstick around she veered toward it and leaned over to minimize the chance of clothes lining herself. The air crackled, and the pressure changed as she crossed an unseen threshold. The bright blue sky evaporated, and Gretchen skidded to a marble floor in a torch-lit room. With the wind knocked from her lungs, she sat up gasping, and banged her chest to make sure her heart kept beating.

“What have we here?”

Gretchen’s eyes widened, and she turned to stare at a man sitting on a stone bench by a door. Her nose prickled, and she wiped at it in annoyance and tittered. “Figures I’d find a wizard portal.”

He laughed. A mocking sound which made Gretchen bristle. “They are all wizard portals, hag. We are the keepers of the doorways between realms.”

Gretchen stood rubbing her hip which was a little tender from the landing. “Didn’t see you over in the fairy realm, bucko.”

His eyes sharpened, and he stood. “What were you doing in the—”

Gretchen held up a hand. “None of your beeswax, mister. Let’s just say those spiders won’t be a problem for a while. Now, if you wouldn’t mind, I’m gonna take a gander at what’s past that door before I start sneezing.”

The wizard folded his arms, and his face darkened. “Nobody may cross without permission.”

“Pah,” Gretchen waved a hand and brushed past him. “You just try and stop me, conjurer.”

Gretchen pushed the door open and stepped into brilliant white light. Her eyes widened as her feet found no purchase, and she blinked at the bright blue sky. She plummeted, the weight of gravity sucking her down through misty clouds.

With an ironlike grip on her broom, she willed it forward, and though it jerked and vibrated with turbulence, the sudden shift from dropping to flying was welcome. She was hanging. Prone. Her hands grew clammy. Her only chance was to angle the broom downward to get it underneath her.

She risked a glance down over picturesque fields and villages and curled her lip. She’d been duped. Below were the same fields she’d been flying over all morning. Her only advantage was the height at which she fell.

Hand over hand, she moved toward the front of the broom to drag it down. Its weight shifted alarmingly, and as its bristles began pointing toward the sky, its trajectory changed, bringing with it an alarming sense of falling again.

Her rump landed on the broomstick, and she grunted. Glad to be alive, yet furious at her own complacency. Once she was back on the ground, she promised herself to find a way to get that portal trickster.

But we wouldn’t expect anything less from her. Haven’t read Witches Teeth yet? Check it out on Amazon here.

Or for more bonus content, head back to the episode page where I keep it all in the one spot.