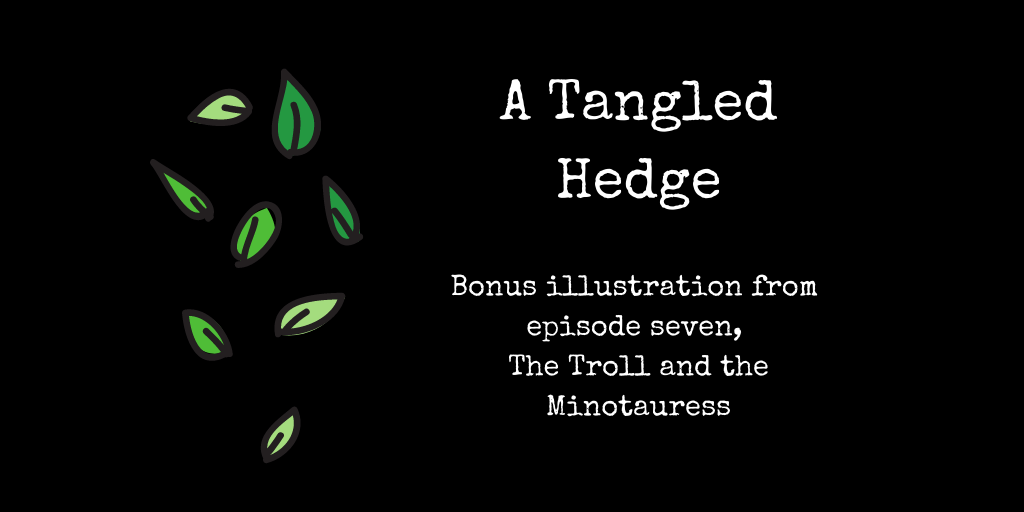 The vision for episode seven, The Troll and the Minotauress, all began in my mind with the mental image of Gretchen flying smack bang into an invisible wall above a maze. It was an idea I discarded for a time, but then inspiration struck and a tragic tale of star crossed lovers unfolded.

These illustrations by Rod Savely really capture those poignant moments in a story. And hey, maybe this one was for my own amusement. But I rather enjoyed writing that part of the story, and the expression on her face really does look fitting.

Haven’t read The Troll and the Minotauress yet? No problem, you can find it online here. Want more bonus content? Head back to the episode page where I keep it curated in the one spot. 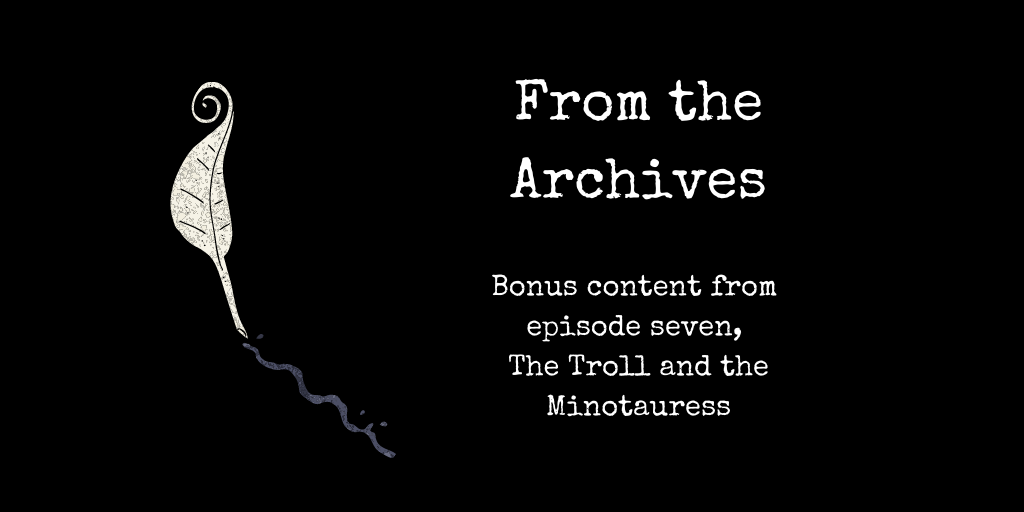 Having Nora’s trusty notebooks on hand was a blessing for Gretchen as she traversed the Labyrinth. While her witchy pal was back at the Academy doing research, she came across a scroll with her own family name which added to the mystery of the strange island. Funny what you can find in the depths of an arcane archive vault!

Witch politics, huh? If you haven’t checked out episode seven, The Troll and the Minotauress, you can pick it up here. Looking for more bonus content? Head back to the episode page where I keep it curated in the one place. 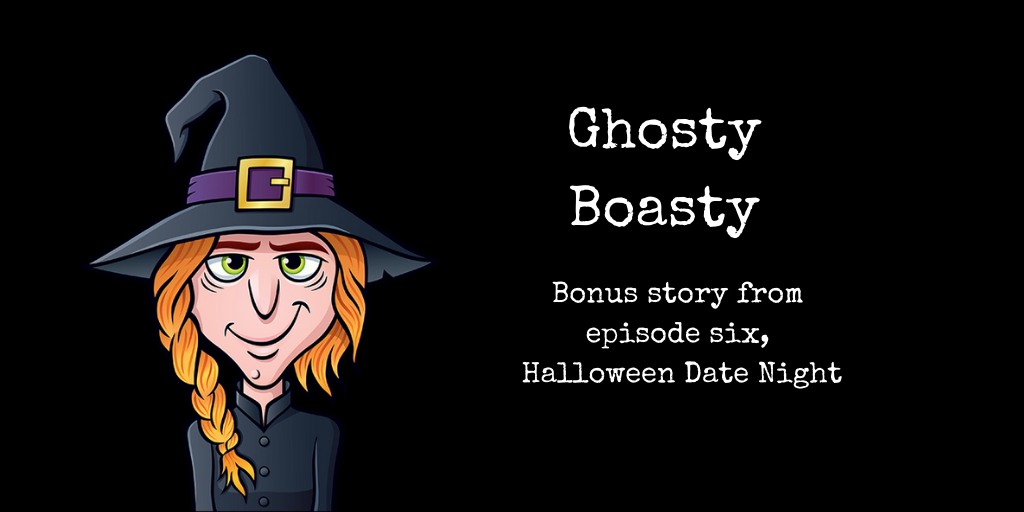 Reginald was quite the character in Halloween Date Night. Gretchen was ready to chew rocks after the corporeal ghost threw her under the cart when the sheriff caught up to them. This little story settles the score, this ghost wont be doing much boasting afterward!

Reginald tipped his mug toward the ogres and gave the gnomes a wink. “We was just lookin’ for a bit of fun, you see? No bad feelings for the big man over there,” he gave Jurgen a salute at the bar. “But once a year to drink our fill is harsh. So we went off to the mill to see if we could scrounge up a proper party to celebrate.

“While I’m not complaining about ghostly booze,” Reginald took a long sip of ethereal ale, and made a face to illustrate his point. “It does leave a lot to be desired.”

Raucous laughter erupted in the tavern and patrons lifted tankards to mouths—whether in solidarity or mockery, Reginald wasn’t sure. The ghost grinned at his companions around the table and raised his voice.

“But a grand party wasn’t to be found, ya see? Oh no, a damsel in distress came calling. The lady in question… our very own Gretchen Murkwood.”

A hush fell over the crowd, with the game of dice in the corner forgotten by the wood elves and gnomes trying their luck. An ogre turned in his seat with an excessive amount of concentration on his blunt features, and even Jurgen seemed to lean a little closer.

“Oh yes,” Reginald declared. “She was in a right pickle, too. She flies up the stairs of the mill into me arms and cries ‘oh Reg, thank goodness I’ve found a proper man such as yourself. I’ve gone and raised the dead.’”

Reginald waggled his eyebrows and drifted closer to the ceiling as laughter erupted. He pitched his voice a louder to be heard. “And I says, ‘well, of course, sweetheart, I’m standing’ right here. Standing at full attention!’”

Reginald grinned as ogres thumped their knees and gnomes clutched their bellies at the quip. But he wasn’t done yet and gave a flourish of his arms. “But ya see, the silly wench did raise a rotting corpse, and it was up to me to save the day.”

The tavern quietened and Reginald blinked as their faces dropped. It didn’t seem quite right, and he turned to see the witch in question standing behind him with a murderous look on her face. She held up a bottle and quirked her eyebrow.

“Save the day, huh? As I remember it, you were happy to throw me under the cart as soon as the sheriff caught up to us.” Her face broke into a nasty grin. “And it’s about time we settle the score. My spell book had a nice enchantment for ghost in a bottle. I think it’s about time you take a little vacation.”

She held the bottle aloft and muttered an incantation. Reginald felt a peculiar wind around him, then screamed as he was sucked into the enchanted vessel. The pressure was stifling, and his view of The Salt and Bog obscured by cloudy glass. The last sound he heard was laughter before Gretchen corked the bottle. Then everything went black.

I think he had that coming!

Haven’t read Halloween Date Night? You can check it out on Amazon here.

Looking for more bonus content? Head back to the episode page where it’s curated in the one spot. 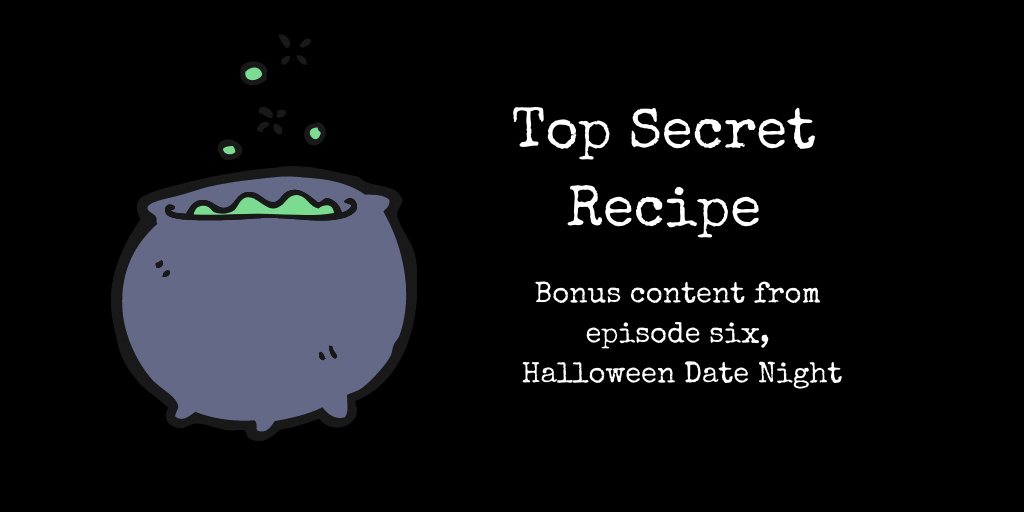 Gretchen finds a little relief in the aftermath of Halloween Date Night when her spell book coughs up a recipe for a headache cure she feared lost. What goes into a witchy headache tonic? Take a look.

I have to give credit where it’s due, and I looked at a couple of articles on outlandish headache fixes while putting this together. You can check out an article on medicine in the middle ages here, and another on migraines here. I think you’ll see where I mashed a few concepts together 🙂

Haven’t read Halloween Date Night yet? Check it out on Amazon here.

More bonus content? It’s all curated together on the episode page. 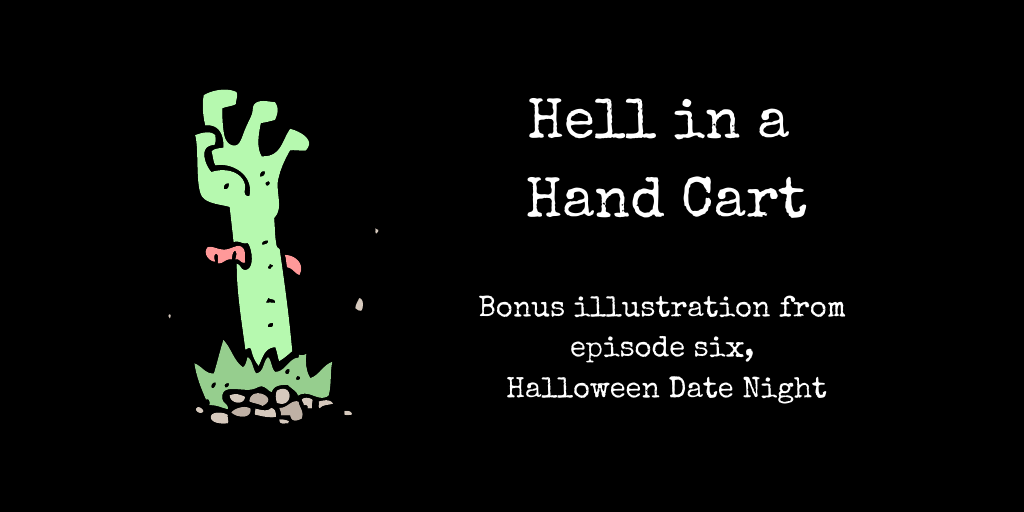 Another illustration with captures the notion… Gretchen’s evening really was hell in a hand cart in Halloween Date Night. Again, Rod Savely has done a stellar job putting this sketch together for me. I really look forward to seeing these land in my inbox and sharing them here.

You can check out more of these illustrations over on the gallery page, they really are turning into a fine little collection.

Haven’t read Halloween Date Night yet? No problem, you can find it on Amazon here.

For more bonus content, head over to the episode page where I keep it curated in the one spot.