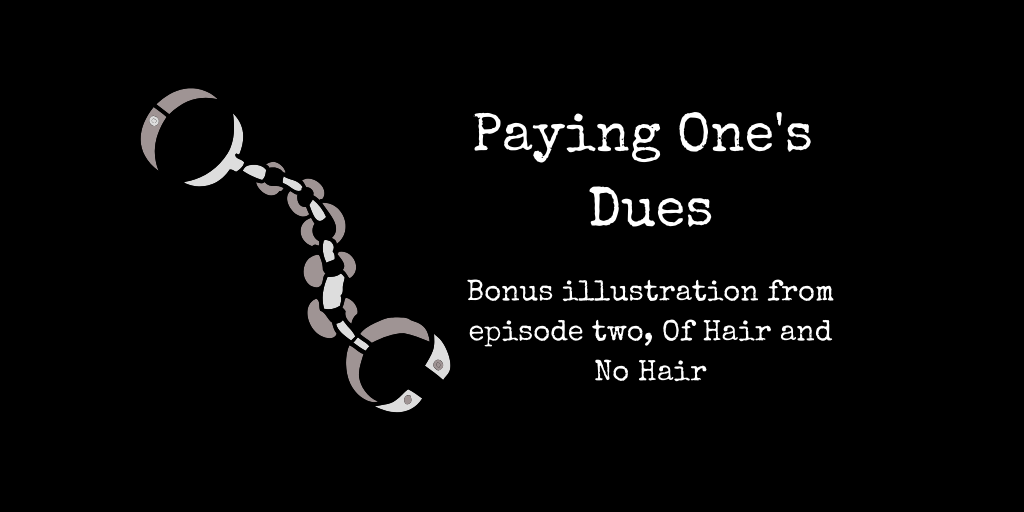 If you’ve read Of Hair and No Hair, you already know where Gretchen ended up after the baron’s swanky party. And once again illustrator Rod Savely has come up with the goods with this drawing.

You would have thought Gretchen would be used to the dungeon by now… Nora’s workroom at the baron’s estate is right beside it! But taking the rap for something she didn’t do (but thoroughly enjoyed) and faced with the prospect of going to Mildred’s house in the morning to apologize has put Gretchen in a foul temper.

I guess paying one’s dues is the less fun part of pranks and mud pits.

And this is just setting the stage. Next week, I’ll bring you a bonus scene. Did you want to know how the confession to the baron went down? Stay tuned.

For more bonus content, check out the episode page where I keep the blog posts for each episode. And if you follow Gretchen on social media, you can keep up with these in real time.

Haven’t read the book? No problem. You can find it on Amazon here. 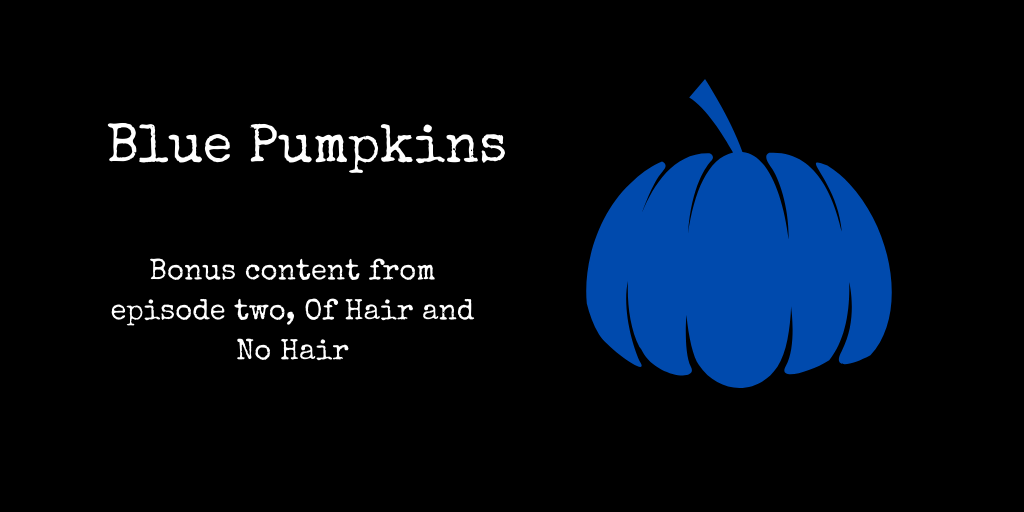 Here’s a tale about that year Gretchen turned in a crop of blue pumpkins to the county fair. No wonder Mildred’s suspicion of magical tampering runs high in episode two, Of Hair and No Hair.

Gretchen had decided against the orange paint tucked away in the cart on the trip over to the county fair. There was nothing in the rule book that stated the pumpkins must be orange, but there was a strict no-tampering policy.

And this time, she could hand-on-heart say that she had not meddled with those pumpkins since planting them. She’d done it well before then. Gretchen never suspected that seed charm would have turned her pumpkin harvest bright blue.

She narrowed her eyes at the canvas sheet covering her crop. The others had all asked about it, and she’d given the same answer. There was nothing that stated she had to leave them in the sun all day, and she wouldn’t have them spoiling.

Nora gave her a level stare as she approached with her measuring tape, the entourage of onlookers and contestants following her. She’d given her pal the same nonsense, and Gretchen supposed the only thing that held her back from insisting she uncover them was not wanting to know what she’d done. Her position as the judge of the country fair put their friendship in a precarious position most years.

“Well?” she nodded toward the canvas. “You expect me to measure them like that?”

Mildred snickered, already gloating from her impressive measurements, then pressed her lips together. “Nothing to be ashamed of. We can see quite clearly they aren’t anything to write home about.”

Gretchen refrained from grinding her teeth. Mildred. Always with those snippy remarks. With a deep breath, she turned and braced herself as she flipped the canvas over.

It was dead silent, then the crowd burst into laughter.

“What is the meaning of this?” Nora growled.

Gretchen turned with her hands held up. “I swear, this new ‘trick’ I heard, watering pumpkins with blueberry juice, isn’t half as good as I thought it would be.”

It brought more laughter from the crowd, and only Nora and Mildred looked outraged.

“Blue this time?” Mildred curled her lip at Nora. “And what’s next? Square pumpkins next year? You can’t honestly believe this blueberry juice nonsense.”

Nora rubbed the bridge of her nose, her face stony, and she took a minute to consider the situation. “Gretchen Murkwood, the kitchen at the Baron’s estate deals in pumpkins bigger than those. Do you honestly wish to enter these into the competition?”

Gretchen considered the words carefully. If she said no, they wouldn’t be scrutinized. If Nora decided they had been interfered with, she could be disqualified for next year’s fair. And she was right, they were barely worth bringing at all. It was only the hope of the other contestants all encountering some kind of horrendous vegetable blight that had decided her. That, and pride.

“Well of course not,” Gretchen waved a hand. “These ones are prizes for the winners. And I’d certainly like to see what the bakers come up with. Blue pumpkin pies will be the talk of the town!”

Mildred looked as though she was sucking a lemon, and Nora only shook her head. They moved on in the procession and Gretchen dug out a fistful of seeds from her pocket.

“Never trusting that darn spell book again.” She threw them over her shoulder, and hoped next year she would be standing among a sprawling vine of blue pumpkins. It would be worth it just to see the look on Mildred’s face.

Was anyone ever going to believe her?

I think not. But we all know Gretchen did not learn the lesson she needed to (if you have read Of Hair and No Hair.)

I’ll be adding more bonus bits to the blog each week, so be sure to check back in on the episode page to keep up to date.

Haven’t read it yet? No problem. You can find Of Hair and No Hair on Amazon here. 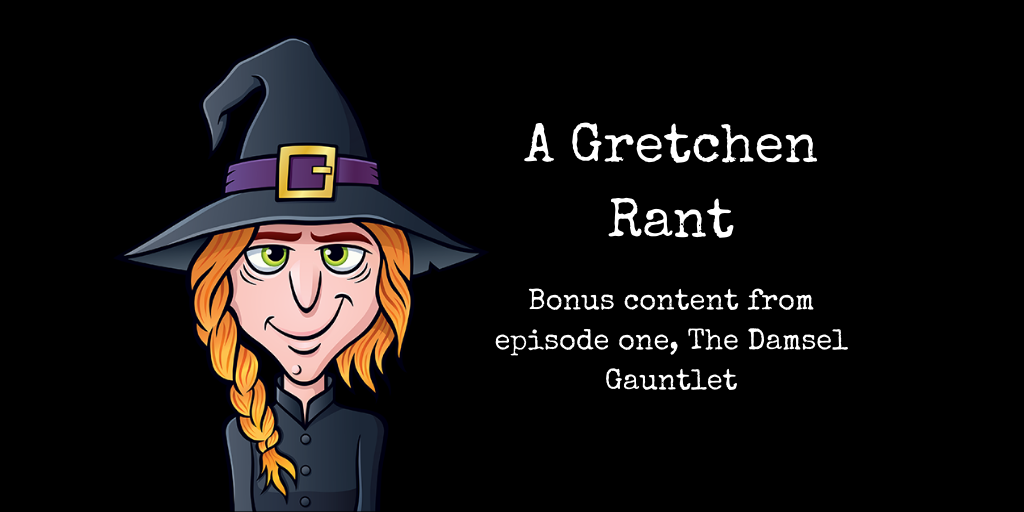 Gretchen here. Ever wondered who’s in charge of the history books?

This guy. The Scribe of the Realm. A snooty nose cretin who, in Mrs. Hughes’ words, has ‘a mouth like a cat’s caboose’ and is a ‘pretentious little quill twirler’. I like Mrs. Hughes, made of stern stuff that broad.

But the scribe. His job is to make the big guys look good. And make folks like us looks like depraved creatures of dim wit and foul stench. What would he know, anyhow? I’ll wager when he has a boil on his backside he’s the first to seek out a reputable witch for a cure.

That whole fiasco with the prince is a case in point. When THAT proclamation was handed out I was ripe to go past and ram that quill of his right in his ear. Lapped it up they did, the townsfolk, whispering about evil witches while I was standing around with them! Not that I’m complaining about the gold, you see, but what he says just ain’t right.

The stigma that comes with being an outsider among normal folks can only be broken with good ole fashion truth telling. And that state sponsored propaganda fuels those old stereotypes that gets gals like us pushed to the fringes of society. We should go on strike, is what we should do. Let them get by with what those quacks they call doctors can rummage up from their stores of bat guano and rams testicles. That’d learn em.

One of these days I’m going to get square with this guy. Maybe write a memoir, chronicling my encounters with his venomous words and promotion of hate speech. The day it is a comin’. When people won’t stand for it any longer. When they wake up and realize they were allowing all this to happen. It’s already started with the bill passed for the rights of enchanted folks. That there was a dam ready to burst. And if I remember rightly, the Scribe had a piece in the Golden Gazette saying the end times were coming. I’ll bet nobody remembers him saying that, now, do they?

Maybe I should start a hashtag. That’s what folks do when they’re bound by confidentiality agreements, isn’t it? State there is one in place and come up with a term for the general pop to fling around? How about #TheSnotNoseScribe or #ScribeGate or even #FakerNews??

Anyhow, I’ll probably need to speak to Nora, get a GoFundMe happening, organize meetings, do a social media takeover… Who am I kidding? It’d be easier to stick his twill in his ear and be done with it.

Doesn’t sound impressed, does she? Did you check out the proclamation last week? You can find all the bonus content for The Damsel Gauntlet on the episode page.

Haven’t caught up yet? The Damsel Gauntlet is available with all your favorite book retailers. 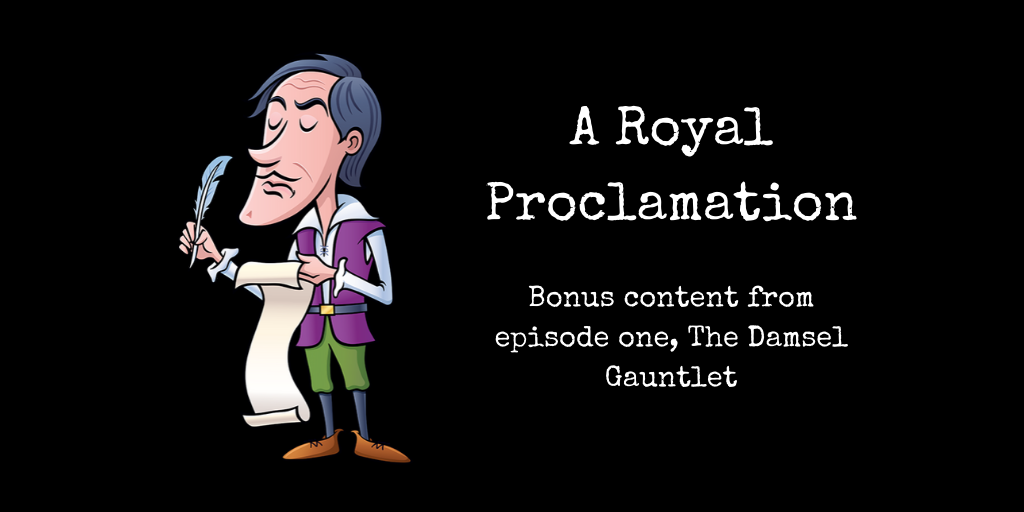 This royal proclamation is intended for those who have read The Damsel Gauntlet, because, well spoilers. Don’t mind? Scroll down to check out this short story.

Gretchen frowned as she passed the town square and headed toward the group of gawkers milling around. She guessed it was the latest in the series of missives authored by the Scribe of the Realm. After reading the last one, she thought she might have had a heart attack from all the laughing. Fearsome goblins, indeed.

A man in the king’s livery turned from nailing a poster to the wall, and cleared his throat to address the citizens. “A royal proclamation from the Scribe of the Realm, who details Prince Jacob’s exploits as he rescued his fair princess in the wild mountains beyond our borders.”

The crowd exclaimed and milled about to get a better vantage. The man took another poster from his satchel and held it up so he could read it out.

Gretchen ground her teeth at the cheers from her neighbors and bunched her fists in her skirts. Vile, eh? She’d show him vile. Her errands forgotten, she turned back toward her cottage and resolved to go see Nora. She could think up a few unpleasant hexes that would suit that little twerp.

Confidentiality agreements can be rough! I hope you enjoyed A Royal Proclamation, a bonus short story for The Damsel Gauntlet. If you haven’t picked up your copy yet, check it out with your favorite book retailer here.

And don’t forget to check out the other bonus bits on The Damsel Gauntlet episode page here. 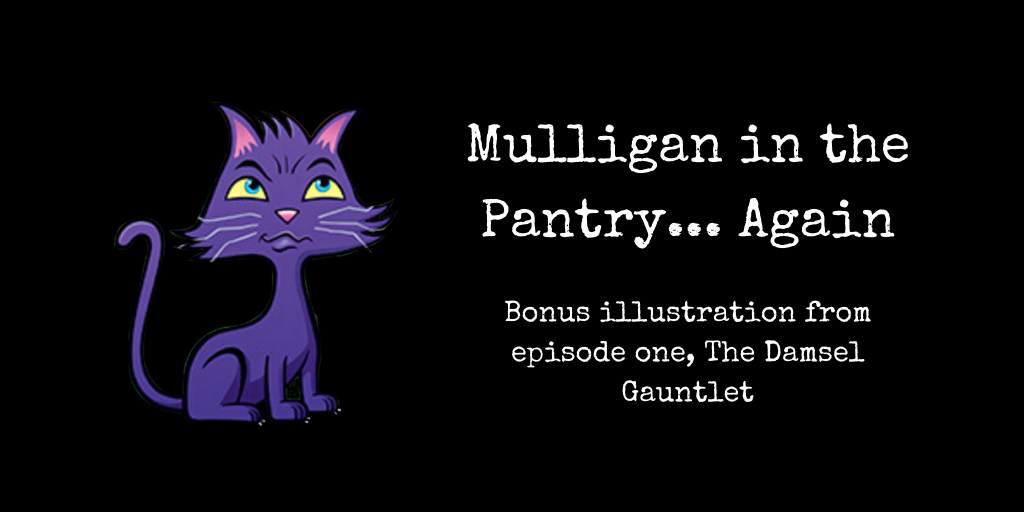 Oh, Mulligan! I love these images from Rod Savely. An image holds a thousand words, or reflects just a couple in the opening chapter of ‘The Damsel Gauntlet’.

What does Gretchen even do with pickled livers, anyhow? Does she use them in her potions or is that the kinda thing she eats on toast? Mulligan doesn’t seem all that fussy for a feline, but perhaps that’s a witches familiar thing.

And in case you missed it…

Gretchen stumbled into The Salt and Bog plucking leaves from her braid while mumbling under her breath. When she turned her attention to the crowd, her eyes widened at the regulars who’d turned to smirk at her.

“Broom problems?” Jurgen snickered from behind the bar as he poured ale from a barrel.

Gretchen clicked her teeth shut and cleared her throat. “Need to get that darn thing back to the shop. Can’t get good service these days. And I’ll hear no guff from you lot, or I swear I’ll curse your trousers to itch for months.”

The crowd broke out in laughter, only too aware of Gretchen’s lack of prowess in the curse department. She spotted Nora sitting at their usual table. Heaving a deep breath, she trod over and sank to the stool beside her.

“Tough day?” Nora had the decency to hide her smirk behind her hand, and Gretchen closed her eyes with a sigh.

“That alchemist stiffed me on most of the supplies I ordered, a customer changed her mind on the vermin poison, and Mulligan got into the pickled livers again.” She curled her lip. “Filthy feline has been farting all afternoon.”

Looking forward to sharing more of these with you next month

If you haven’t read this title, you can check it out with your favorite book retailer here. Not ready to splash any cash? Check out Episode 0.5 which you can get free for signing up to my newsletter here.