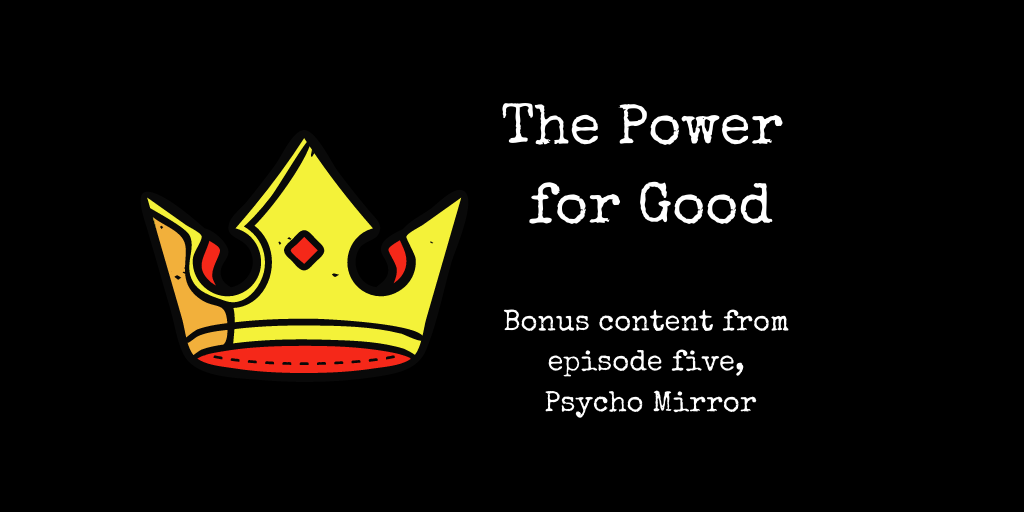 In the aftermath of book five, Psycho Mirror, the shards are collected by Agnes, the resident specialist at the Witches’ Academy. But could the Crimson Queen sweet talk another sorceress locked in the vault of the hallowed halls of feminine arcane power?

The Power for Good

Cordelia reached to touch Agnes’ shoulder as the old woman sat slumped sentinel over the shards. The woman had scarcely rested since returning from Extor, and while Cordelia applauded her steadfast commitment, she wouldn’t see the old woman run into the ground. Not when it had taken all of the Academy’s might to convince the King not to turn the remnants over to the Wizards’ Guild. She would need Agnes’ skills to bind the enchantment beyond reproach.

The old woman startled and sat up blinking. “Vice Chancellor. I only nodded off for a moment. I—”

“Go to your bed, Agnes.” Cordelia smiled warmly. “I can take this watch, and come morning you can approach the task with vigor.”

Cordelia watched the old woman leave studiously, relieved she didn’t put up any kind of argument. The council had warned against leaving any witch with the mirror for lengthy periods, and though Agnes had always been staunch, she worried over the influence the enchantment may yet be capable of. She took up Agnes’ chair in the shadows of the vault, and cast her eye over the pieces of glass arranged on the floor.

Though the only light source was a constant white glow from hanging orbs on the ceiling, shadows flickered across the hundreds of reflections. Almost as one, like a shape was moving across them. Cordelia refrained from squirming in her seat, but the notion that the creature capable of bringing down a nation was lurking at her very feet was unsettling. Nora Brightstar was made of stern stuff, and if she was so easily glamoured…

“Cordelia Murkwood,” a crooning voice called. “The Murkwood favored with the intellect of her ancestors. Unlike her simpleton sister.”

Cordelia blinked and pushed away the sense of gratification that came from those words. “Be silent. We shall have your poisonous tongue bound for all eternity.”

Mirthless laughter sounded and Cordelia wrung sweaty palms in her lap. “Of course. And throw away any chance of the Academy becoming great again. A bunch of toothless tigers assembled to pay lip service to the king. How far this place has fallen.”

Not for the first time, Cordelia wondered who the woman had been before coming to the mirror. How many years she may have dwelled underneath the surface of reality. She had yet to even establish how Nora had come by the mirror in the first place, and if she could learn more…

“Tell me of yourself,” Cordelia grimaced at the crack in her voice. “How does a witch who promises greatness become trapped in an enchantment of her own design.”

The chuckle that sounded reverberated through the stone floor and Cordelia sucked in a sharp breath through her nose.

“Trapped, you say? What if I chose this? I am not so pretentious as to claim unlocking the secrets to immortality, but this is close. There is wisdom in waiting for a world that is ripe for the picking. The lands have become soft in their complacency. The time of the witch has come.”

Although Cordelia felt bile rise in her gut, the words spoke to her inner yearnings. She couldn’t trust herself to speak, and worried the witch was peering into her very soul.

“Come now, Cordelia,” the voice clucked. “Nora Brightstar was a means to an end. Imagine what the likes of you and I could achieve together. The youngest Vice Chancellor in the history of the Academy. A true woman of worth with impeccable lineage. A woman of vision, who knows the world would be a better place in the hands of our kind.”

Cordelia’s eyes felt heavy, and the words struck chords deep within her being. The monarchs she served were idiots. The plight of witches was real. Wizards weren’t to be trusted. They could do things better.

The sound of the vault’s door swinging open snapped Cordelia from her reverie, and she held a hand to her chest as Agnes shuffled in.

“Forgive me, Vice Chancellor,” she nodded. “I almost forgot to give you these.”

The old woman proffered a pair of ear plugs and Cordelia plucked them from her palm with a quizzical look.

“Enchanted to keep that creature from nattering at you all night.” Agnes yawned and wiped her eyes. “Though I’m sure you would have done just fine without them.”

Cordelia nodded gratefully and stuffed in the plugs the minute Agnes left. It had been a close call. The experience only left her more certain the mirror must never leave their walls. In the hands of wizards they would all be in grave danger.

Phew, that was close!

Haven’t read Psycho Mirror yet? You can check it out on Amazon here.

Or if you’re looking for more bonus content, head back to the episode page to find it all in the one spot. 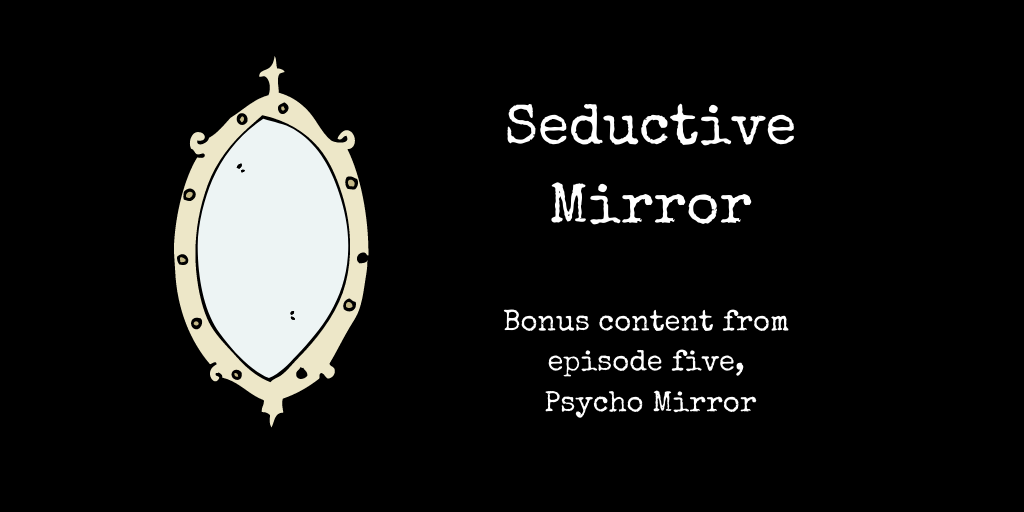 What happened to poor Nora in the weeks leading up to book 5, Psycho Mirror? We know she got some kind of mirror delivery, but how she decided to up and leave the baron’s service was a mystery. This piece of flash fiction shows just how seductive the mirror’s call could be.

Nora sat cross-legged on the cold flagstones in her workroom staring at the mirror. Somewhere in the back of her mind she knew she should tend to the waning coals in her fireplace, but she couldn’t tear herself away from the Queen’s radiance.

Her image was perfect. The absolute regal bearing of a woman of unmatched power. Nora couldn’t understand why she couldn’t see things plainly before. How witches should be set above all others as was their birthright, and how she could serve at the Crimson Queen’s right hand. Once she was out of the mirror.

“You shall gather an army for me, Nora Brightstar,” she crooned.

Nora nodded dumbly, and stood to fetch a scrap of parchment from her desk. Her falcon could take word to Gretchen. Her friend could summon the others. She scrawled a note in haste and pulled her winged falcon familiar from his brass cage.

She sent him off out the window in a daze and returned to the mirror, hoping for a word of praise. A smile spread over the Queen’s lips and she leaned in closer to the glass that separated her from the world.

“Good. We must be away, Nora. We shall find a young woman who can bear my soul. Carry us to the greatest of glory.”

Nora blinked and nodded. She would do as the Queen wished.

“It is the kingdom of Extor that we will bring to its knees first. Once we have it in a firm grip, the entire continent will be our prey.”

Nora flinched then blinked. There was a niggling drifting in her mind. Each time she stumbled on its source, it dissipated like a swirl of smoke. Strong feelings of vengeance realized replaced it, and she cackled mightily.

“It will be as you say,” Nora nodded eagerly. “I’ll fetch a cart from the stable.”

Nora stumbled from her workroom into the dead of night in the baron’s courtyard. She’d be gone come morning, and would only return to unseat the sniveling lord when the time came. After that, she would make it her business to hex him until the end of her days.

And we all know what happened after that!

Or maybe you don’t. If you haven’t read Psycho Mirror, you can find it on Amazon here.

Or if you’re looking for more bonus content, head back to the episode page where I keep it curated in the one spot. 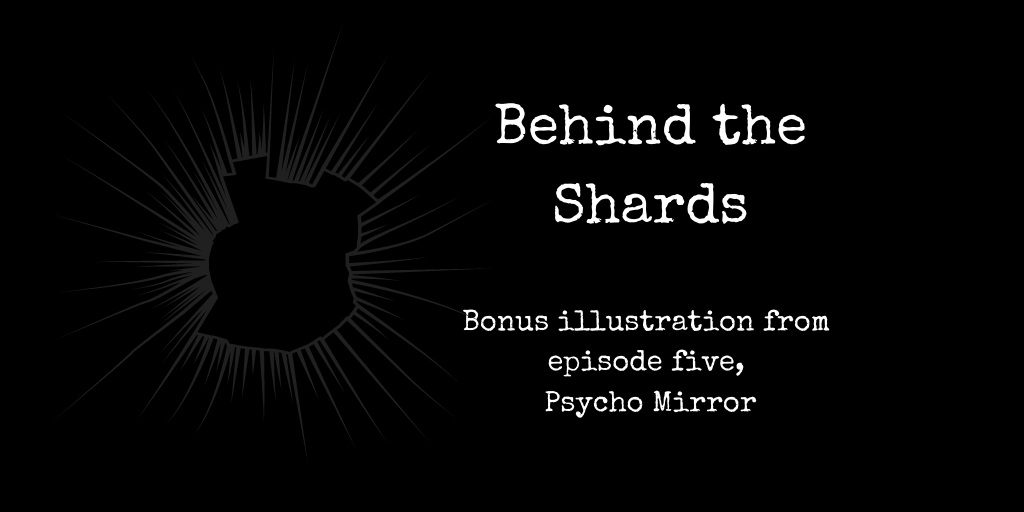 After the mirror is broken, we see the crimson queen’s true face behind the shards. Rod Savely has done another awesome illustration for book 5, Psycho Mirror. It’s a little like Christmas when I see an email with attachments come through from him.

Are you a Gretchen fan who likes to draw or paint? I’d love to see your work.

If you haven’t read Psycho Mirror yet, you can check it out on Amazon here.

Or if you’re looking for more bonus content, head back to the episode page where I curate it all in the one place. 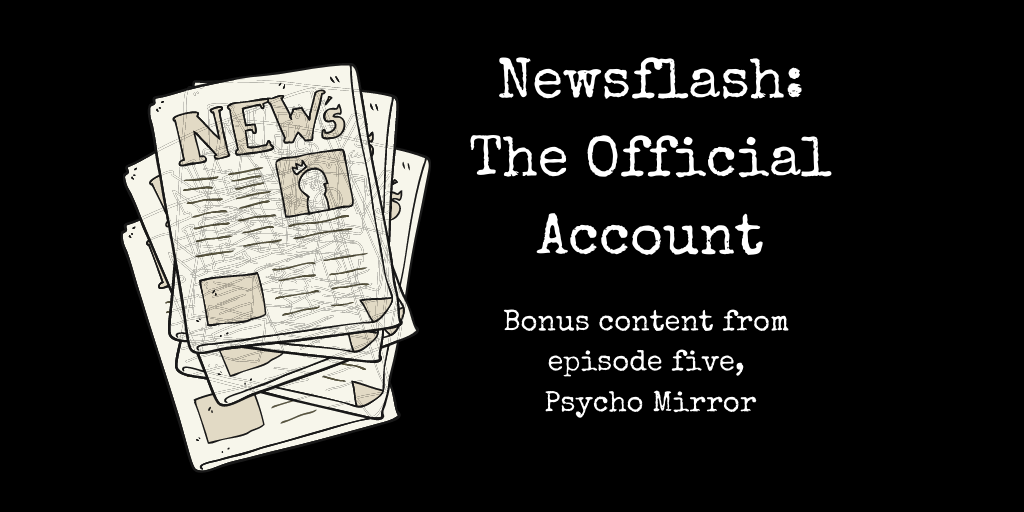 It didn’t take long for The Scribe of the Realm to get back on his feet and start pushing the King’s agenda in his publication after the events of book five, Psycho Mirror. I get the feeling that Gretchen will be chewing rocks when she reads this ‘official account’!

Because of course, we all know in this twisted fairy tale political landscape the bluebloods come out on top in the end. Let’s just hope our witchy cast prevails against the might of big media. I’m sure they will… if Gretchen has anything to do with it.

Haven’t read Psycho Mirror yet? No problem, you can check it out on Amazon here.

Or if you’re looking for more bonus content, head back to the episode page to see it all curated in the one spot.